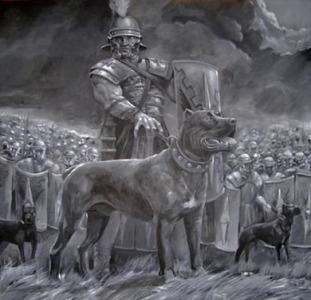 Cane Corso - History of the Roman Dog of War

Cane Corso is an impressive dog breed. It is a native Italian breed that is believed to originate in the region of southern Italy. Since their beginning, they were quite a frightful sight to see. With their pointy ears and muscular body, they remain one of the most fearful dogs to this day.

They belong to the Molosser family of dog breeds. This dog breed family originated in an old Greek tribe and the kingdom of Molossians, and it is clear where they got their name from. They were large and muscular dogs that had a strong defensive and guarding instinct. They served the Greeks for many centuries and were quite popular throughout the Molossian kingdom as well as the whole of Greece.

Origin of the name

This breeds name consists of the Italian word “Cane” that translates to the word “dog”. The second part of the name is “Corso” and it is believed that this word comes from the Latin word “cohors” that roughly translates as “protector” or “guardian”. That was their first purpose, to guard and protect farms and farmers from invaders as well as wild predators. Thus the name Cane Corso came to life. They are also known by their other names such as Cane Corso Italiano, the Italian Cane Corso, and the Italian Mastiff.

History of the Cane Corso

This breed is closely related to the Neapolitan Mastiff, they are practically cousins and they share their genetic heritage. Both of these dog breeds came to life when the Roman empire attacked Greek islands and encountered the Molosser dog breeds. They decided to take some of these dogs back to the Roman empire and breed them with the native dog breeds. The first dogs that were created in Roman times from the original Molossers were called “Canis Pugnax” - the Roman dogs of war.

These two dog breeds started to divide and became two completely different dog breeds through carefully introducing other native Italian dog breeds into their genetic pool. They were carefully bred so each breed would have distinctive traits and today we can see these differences.

These dogs were famous Roman war dogs. They were trained for a specific purpose on the battlefield and their imposing looks stroke fear in their enemies. They used to be even bigger and they had special armor made especially for them so they could stay alive as long as possible and be shielded from arrows and spikes. The Romans trained these dogs to charge their enemies while carrying flamings buckets of oil on their side. There are many ancient pictures and statues of these dogs in armor and depicted as guardians and companions of Roman soldiers.

Besides the famous war history of Cane Corso, they had other purposes as well. Since they were used mostly by farmers as general farm-working dogs, they were also used for big game hunting. They were extremely fit and had great stamina and power so they could take on bigger animals and not get hurt.

Cane Corso dogs were also used for bloodsports in ancient Rome. They were involved in all sorts of blood “entertainment” the Romans had such as bull-fighting, tiger and lion fighting, gladiator battles, and dog battles. It is said that 4 Cane Corsos could kill a tiger or a lion.

These dogs were extremely successful in the “Tauromachy” a sport that involved bulls and dogs. The goal was for the pack of usually four dogs to immobilize the bull by grabbing them by the ears or the muzzle. These are the two most sensitive parts of the bull and if the dogs would manage to catch the bull it would immediately immobilize them due to the extreme pain. This barbaric sport existed in Spain and illegally in Italy up until the 20th century.

After the bloody Roman part of this Cane Corso history, they started to move towards the quieter life and were mainly used as guard dogs as well as farm dogs. In Italian farms, these dogs had several jobs given to them. They used to guard livestock, helped farmers with heavy loads, and were used as hunting dogs because of the traits these dogs had from ancient times. Their natural guarding instinct made them into great guard dogs of everything they believed to be their property.

They were used a bit less in the hunting activities but they were known to be successful in the hunting of large game such as deer, wild boars or even bears though they were first and foremost used as guard dogs.

With no one to care for the dogs, they weren’t bred anymore and started to die out. Those who remained were most likely killed for their fierce loyalty and unwillingness to leave their owners.

After the War, the traditional Italian lifestyle was completely changed and there were fewer farms that needed a guard or a working dog. Those that remained turned to mechanical farm assistance so the dog's jobs rendered obsolete. Also, firearms became popular and easier to purchase so it became easier to defend your farm and land without the assistance of a large guard dog.

Very few pureblood dogs remained and they were brought to near extinction. They managed to survive in the rural parts of Italy where they remained employed by the Italian farmers and families. In the 1970s a group of enthusiasts started to gather all the information about these dogs and they tried to track as many as possible. They began planning the selective breeding of the breed and we know today that thanks to them, this beautiful and historic dog breed is still around.